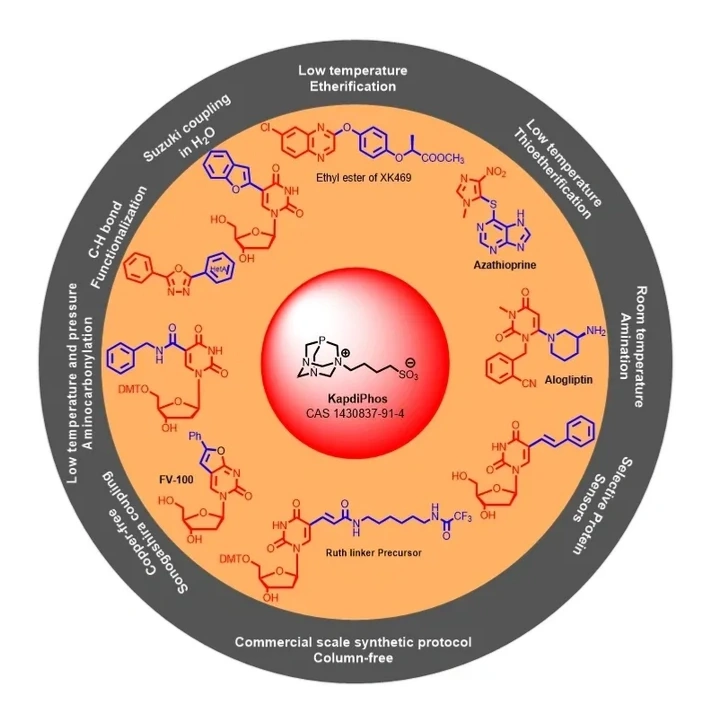 Our first entry into Flow Chemistry with the IKA Flow reactor designed by Prof. Stephen Hilton from UCL, UK.

Bicyclic caged phosphines are unique ligand systems with properties that are unmatched compared to the normal phosphines. Limited degree of freedom coupled with steric and electronic factors that can be easily regulated, provide extra potential for the caged ligands to find applications in catalytic reactions wherein other ligands have either failed or shown lower reactivity. In literature, many such examples of caged ligands in combination with metal precursors providing enhanced reactivity than their other phosphines counterparts have been reported. Verkade with the Proazaphosphatrane ligand sytems revolutionized this field with many excellent contributions, however the application of caged ligands reduced drastically post-Verkade era until recently. The past decade has seen a major resurgence in the synthesis and application of caged ligands with research groups including ours have been able to provide convincing proof about the versatility of these ligands in the form of many state-of-the-art catalytic protocols that have found applications in academia as well as industrial processes.  Our group has been extensively working in this area and have given important state-of-the-art contributions leading to the ligand PTABS being commercialized by Strem Chemicals U.S.A.

For more information check out our papers in this area:

Catalytic reactions for Arene and Heteroarene modification has undergone tremendous change in the past several decades with the advent of C-C cross-coupling and C-H bond functionalization reactions. We have recently discovered that the combination of precursors of metals such as Pd(II) or Cu(II) with a strongly pi-accepting PTABS (KapdiPhos) ligand promotes the functionalization of chloroheteroarenes with a wide variety of nucleophiles at room or low temperature via an unique coordination/activation Pd(II) or Cu(II)-promoted SNAr mechanism. Nucleophiles such as amines, thiols, alcohols, phenols, in-situ generated amines and many others have been found to be effective.

Homogeneous palladium catalysis has been a revolution in the past several decades providing catalytic systems that have solved innumerable synthetic problems in academia as well as in industries. In spite of all this success, homogeneous catalysis still remain a less frequented area for large scale industrial applications and has been over the years overtaken by the heterogeneous catalysis as well as in recent times with nanocatalysis. Another major problem of homogeneous catalysis will be the possible conversion to nanoparticles or colloids during the catalytic reactions that has been proved in situ by several research groups. Our research group for the first time was able to isolate such palladium colloids and thoroughly characterize the material by high-end techniques and applied them towards the development of novel synthetic pathways not achieved yet using homogeneous or heterogeneous catalysis such as C-C bond formation between two electronically different aryl or alkyl boronic acids (first to be reported in literature).

For more information check out our papers in this area: